Whether you’ve heard of Copper Canyon or not, we’ve got a list of facts that will convince any traveller to visit this spectacular destination. It’s time to consider this less travelled slice of Mexico for your next adventure! 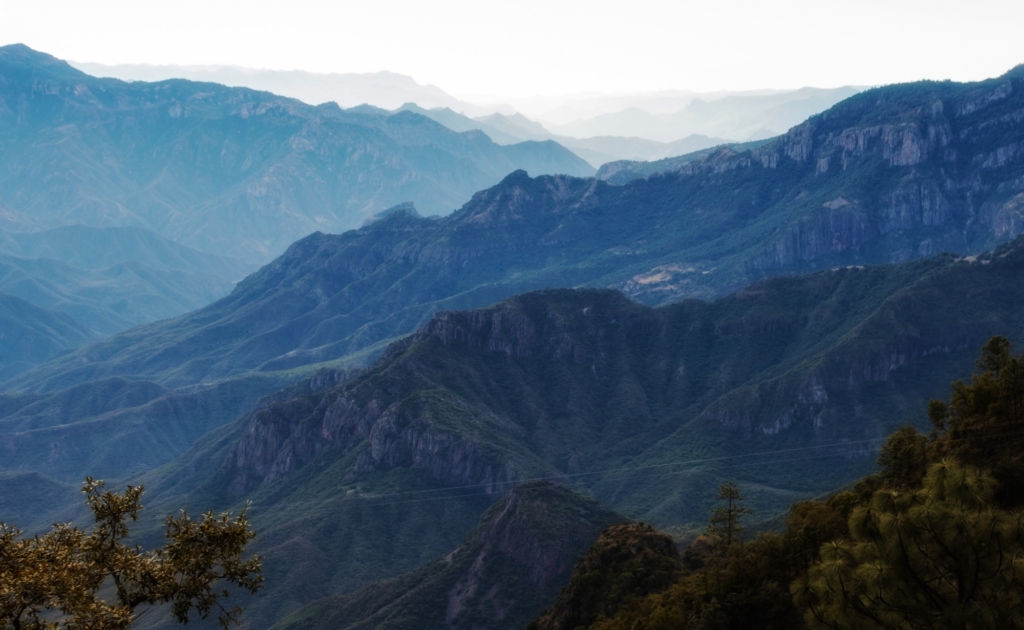 1. Mexico’s Copper Canyon is much bigger than you think

The Copper Canyon is actually a series of 6 canyons, which cut through the Sierra Madre Occidental in northwestern Mexico. The impressive gorges were carved out of the volcanic mountains by rivers. Today, these rivers join together to form the Río Fuerte and eventually empty into the Gulf of California.

The canyon rim sits at an altitude of 8,200 ft (2,500 m) and is full of rocky outcrops and sheer drop-offs. In the Netflix documentary, The Evolution of Us, Mexico’s Copper Canyon is described as “one of the most extreme landscapes in the world”. 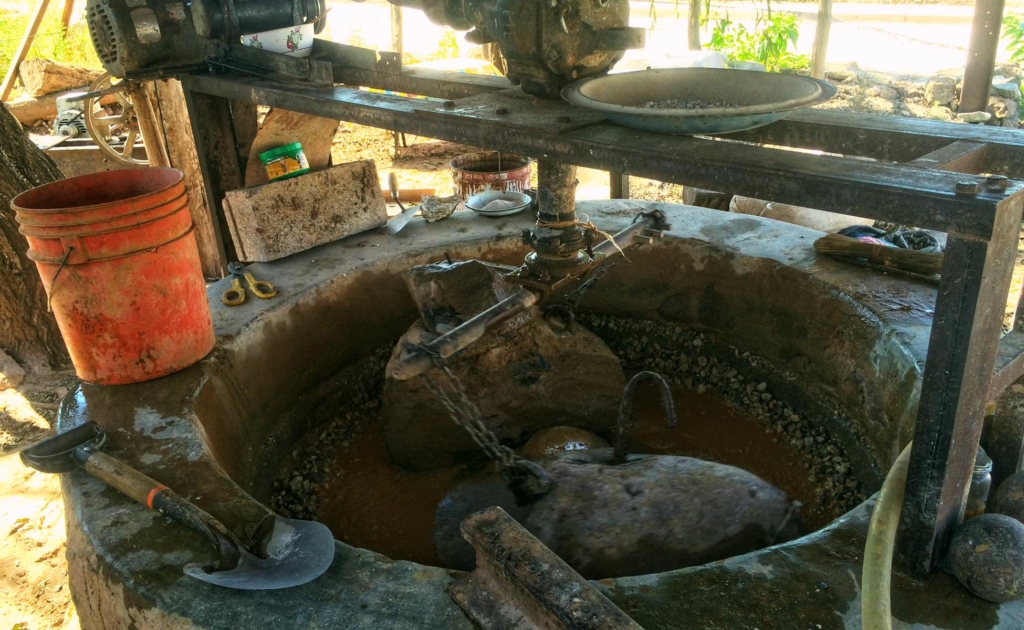 Despite some small-scale copper mining, the Copper Canyon system has predominantly been mined for silver and gold. The Spanish discovered these precious metals in the 17th century and mining has continued ever since.

Although copper was mined in the area, the name Copper Canyon simply comes from the reddish, copper-like color of the canyon walls.

Mining operations in the Copper Canyon continue to this day, helping make Mexico the world’s largest producer of silver.

When passing through the small towns nestled within the canyons, you can sometimes find locals panning for gold and silver, or processing the ore in their yard.

3. Mexico’s Copper Canyon is home to the fastest long-distance runners in the world

The Tarahumara people, or Rarámuri as they’re known in their own language, call the Copper Canyon home. They are a group of indigenous people who have protected their culture and way of life by retreating deep within the Copper Canyon system some 400 years ago when the Spanish arrived in the north. They are so remote and so secretive that there are no accurate estimates as to their population size.

In recent years, the Tarahumara people have attracted the attention of academic researchers and running enthusiasts for their uncanny ability to run extraordinarily long distances. Tarahumara participants have won races and marathons all over Mexico and the U.S., often while wearing sandals and their traditional clothing. At home, in Mexico’s Copper Canyon, they host an annual 60 mile (96 km) race and have been known to run distances of up to 125 miles (200 km) at a time. Not only are they running extreme distances, but they’re doing it in an extreme landscape with narrow paths and sheer drop-offs.

They are a remarkable people and a visit through Mexico’s Copper Canyon will surely include an encounter with those who wish to be seen and not concealed by the canyons. 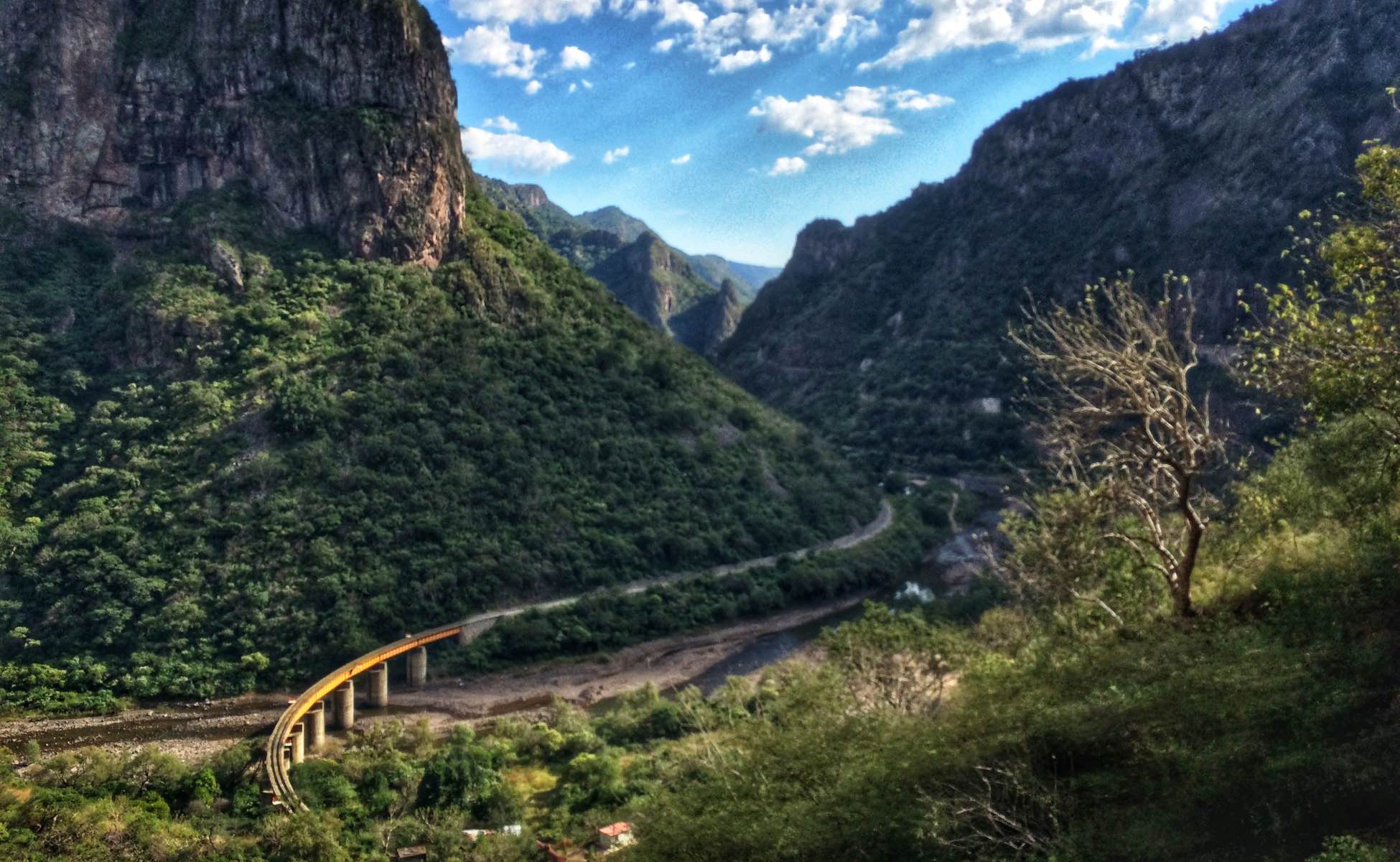 4. Mexico’s Copper Canyon is the site of an incredible feat of engineering.

In the mid-1800s, a man named Albert K. Owen envisioned a railway that would connect the American Midwest to the Pacific coast in North Western Mexico. He had hoped to speed up transit time and ultimately have better access to the Asian Pacific markets.

Unfortunately, he never saw his dream come to fruition. However, by the end of the century, construction had begun on a railway that would traverse the very challenging landscape of Mexico’s Copper Canyon. Due to funding issues and periodic attacks from revolutionaries such as Pancho Villa, it took until 1961 to complete the railway.

The railway track that now stretches from the city of Chihuahua to Los Mochis on the Pacific coast consists of 37 bridges and 86 tunnels. In one tunnel, the tracks make a 180-degree turn whilst descending 100 ft (30 m) inside the canyon walls.

With 400 miles (650 km) of railway track, it truly is a remarkable engineering achievement. 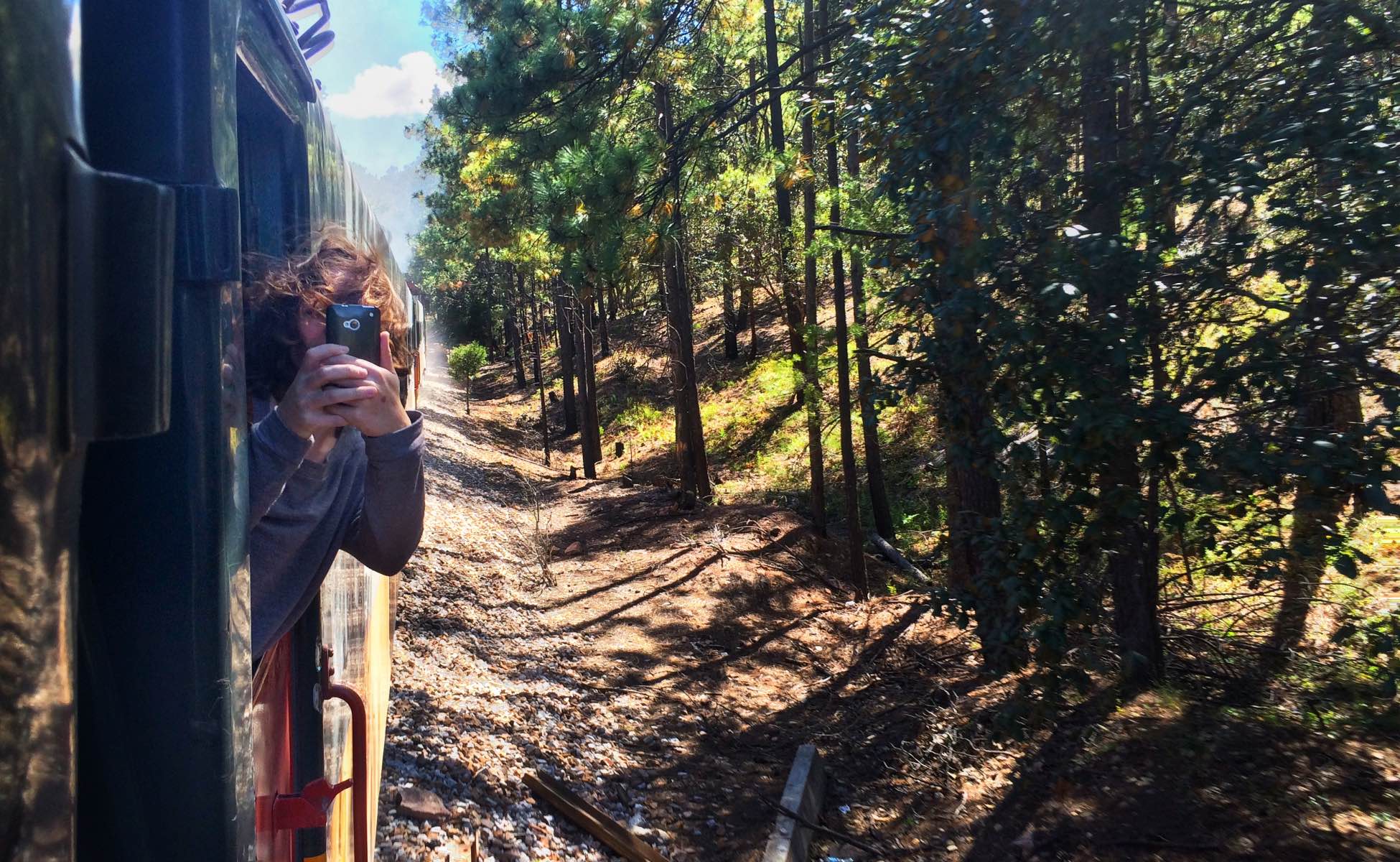 El Chepe, derived from the railway’s proper name, Chihuahua al Pacifico, is one of the only passenger trains in Mexico. The original train, now called Chepe Regional, ferries tourist and locals alike between the city of Chihuahua and Los Mochis, on the Pacific coast. Along the way, it makes over 10 stops at remote towns where travellers have the option to disembark and spend a few nights. It’s an excellent opportunity to experience the cultures of northern Mexico.

As of May 2018, a new train was introduced specifically for tourists. The Chepe Express is a luxury train complete with a panoramic viewing car and a bar car.

On board either Chepe train, passengers are spoilt with unique views of some of the most remarkable landscapes that make up Mexico’s Copper Canyon.

Learn more about the Copper Canyon train, such as  prices, schedules and how to book tickets. 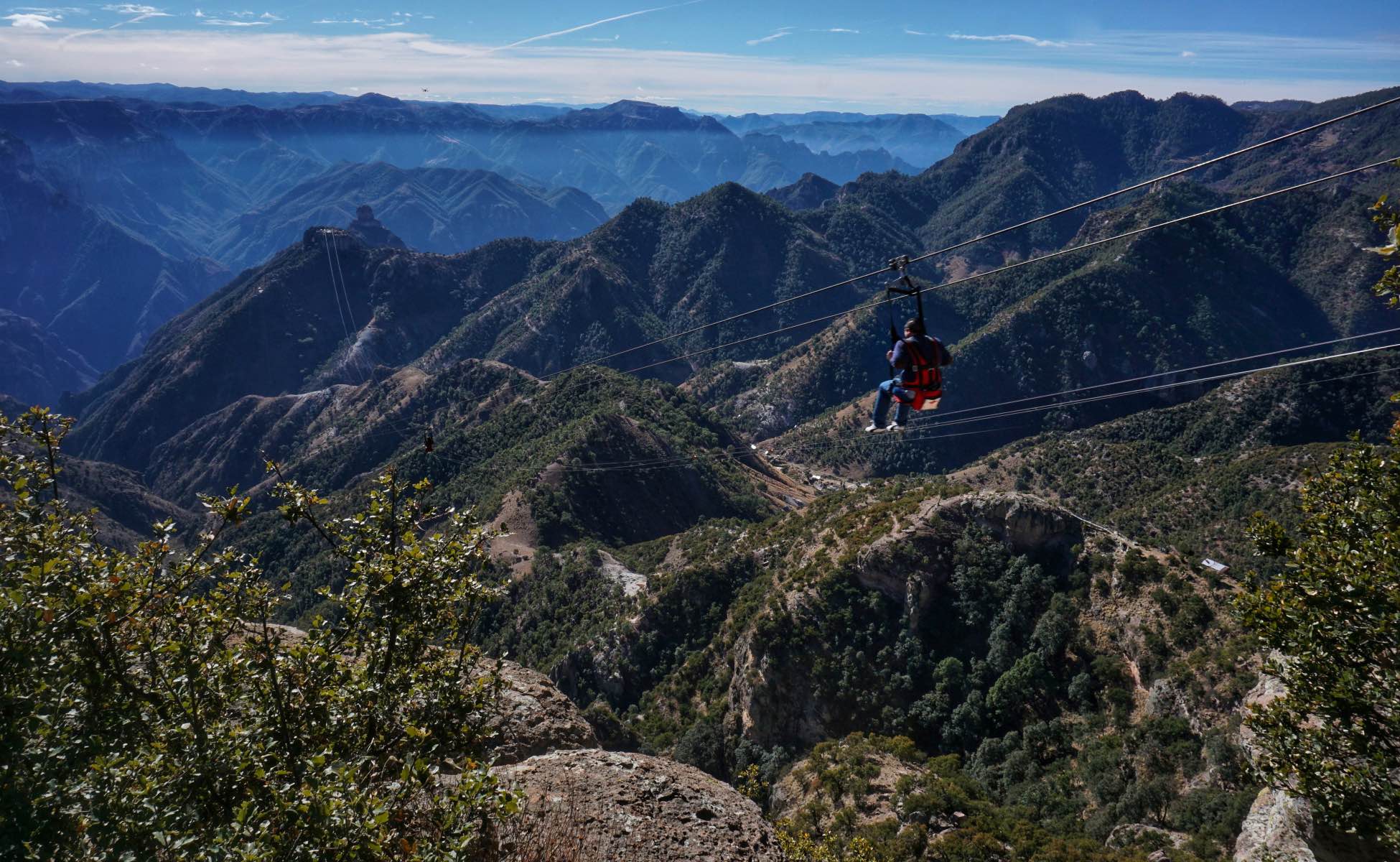 6. Mexico’s Copper Canyon is home to one of the longest zip lines in the world

Situated about halfway along the Chepe route, at the Divisadero stop, is an adventure park featuring an 8,300 ft (2,530 m) long zip line! The Zip Rider, as it’s called, runs almost 1,300 ft (400 m) above the ground from a canyon wall to a rocky outcrop in the middle of the canyon. It’s the second longest zip line in the world and riders can reach speeds of up to 83 mi/h (135 km/h) along the way!

The Adventure Park also has a series of smaller zip lines, suspension bridges, rock climbing, mountain biking and more. If speed isn’t your style you can ride the cable car and experience a different perspective of the canyon system at a leisurely pace. The glass-bottom restaurant at the park also offers unique and thrilling views of the Copper Canyon.

Click the button to find more information about things to do in Divisadero, including more details about the Adventure Park. 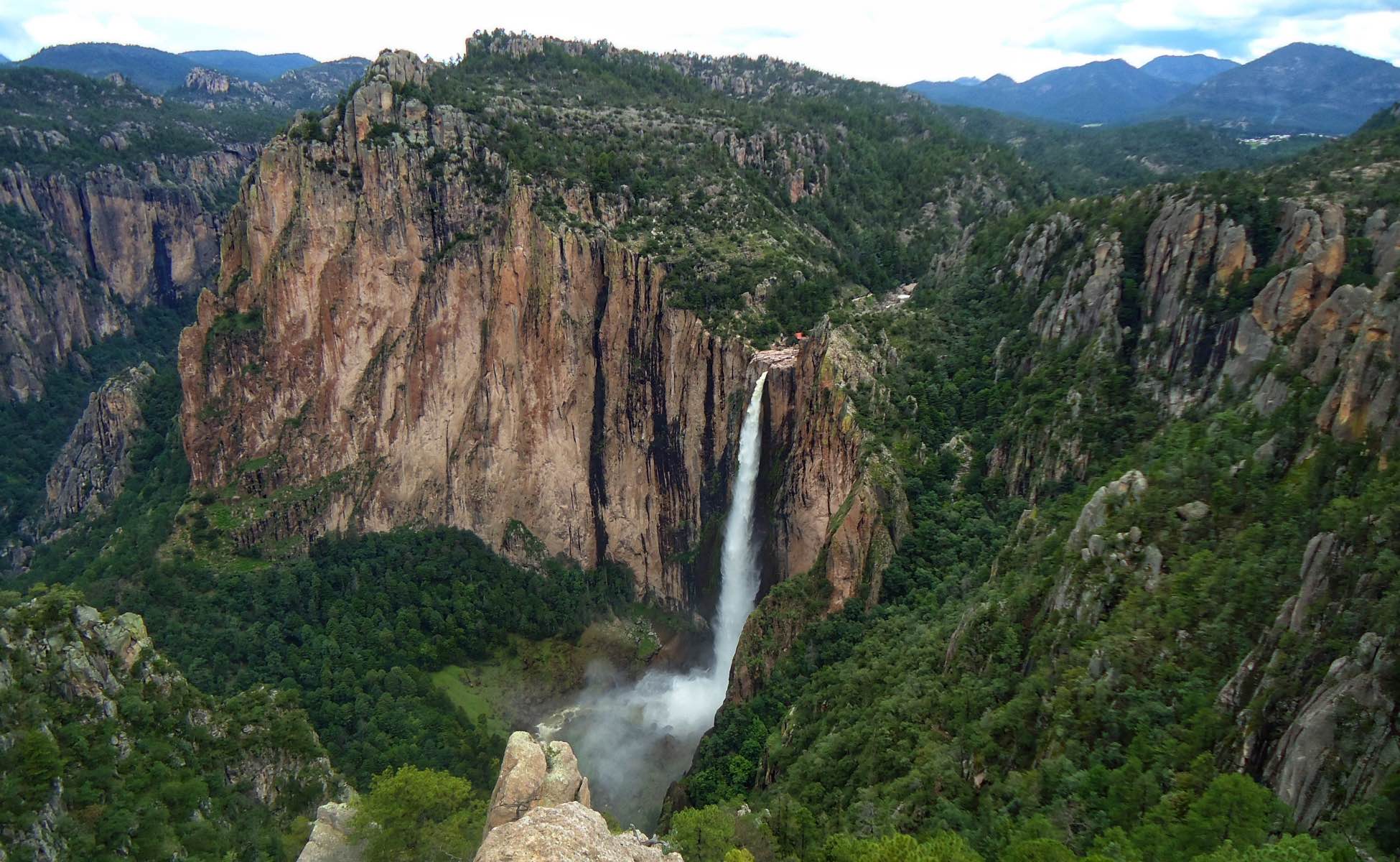 Nestled into the widest of the Copper Canyon ravines are two spectacular waterfalls only a few miles apart. Cascada Piedra Bolada (round stone waterfall)  is the tallest of the two, with water plunging 1,500 ft (457 m) down the rocky cliff and into a rounded out rock formation, for which it has been given its name. Piedra Bolada is best viewed from a distance, as it doesn’t offer much hiking around the actual falls. It also dries up shortly after the rainy season so it’s best to see these falls between June and October.

Basaseachi Falls, the second tallest waterfall in Mexico, tumbles 807 ft (246 m) down the canyon wall. There are plenty of hiking trails around this waterfall allowing visitors to get all kinds of perspectives. Basaseachi Falls have water flow throughout most of the year but are at their most spectacular during or just after the rainy season, between June and October.

The easiest way to see Piedra Bolada or Basaseachi waterfalls is to book a tour from Creel, a small town along the Chepe route. You can learn more about things to do in Creel by clicking here.

Click the button below to learn more about Creel and things to do in and around the town.

8. Even in the winter, tropical plants grow within Mexico’s Copper Canyon.

The highest point in the Copper Canyon is 8,300 ft (2,540 m), while the lowest point is 1,800 ft (550 m). The drastic variation in altitude means drastic changes in climate. In the town of Divisadero, one of the highest points in the Copper Canyon, winters can be 32°F (0°C) overnight and it will sometimes even snow. Meanwhile, at the bottom of the Urique Canyon, the deepest of the canyons, the daytime winter temperatures hover around 75°F (25°C).

These variations in climate support quite a range of vegetation throughout the canyons. In the higher elevation climates, the vegetation is dominated by pine and fir trees. At the lower elevations, deep in the canyons, the climate is considered subtropical, and there you can find fig and palm plants. There’s plenty of other flora to see between the two extreme elevations, including a variety of cactus species.

These climate variations have been very important for the Tarahumara people, many of whom live semi-nomadic lifestyles and head down into the canyons during the colder winter months. 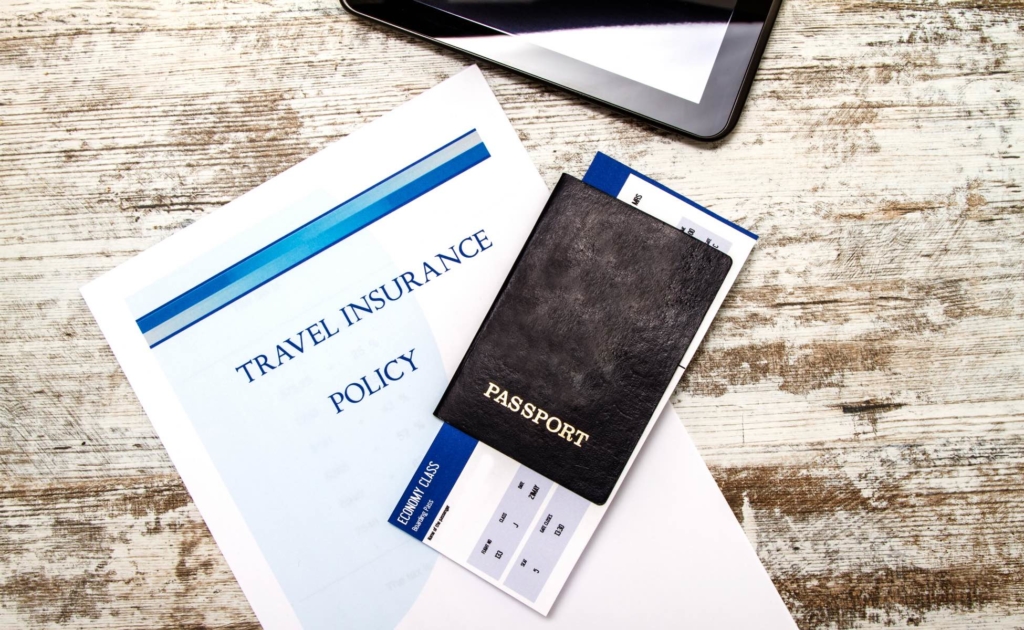 9. Not all Insurance companies will cover travel in Mexico’s Copper Canyon

The governments of most countries will provide travel advisories for destinations around the world. Some travel insurance providers may then use these advisories to deny a claim, even if the claim has nothing to do with the advisory issued.

There are, however, some insurance providers that will provide coverage despite government advisories. Click here to see some suggestions based on your country of residence.

It’s important to know what your government’s advisories suggest and then read the fine print before you purchase your travel insurance. Even if you already have travel insurance coverage through a credit card or benefits plan, give them a call before you leave and be specific about where you will be travelling in Mexico. More often than not, an insurance company will not go out of their way to inform you that you will not be covered.

Learn more about how to purchase the correct travel insurance for Mexico including what questions to ask and insurance providers that cover travel in the Copper Canyon.

10. There’s no bad time to visit Mexico’s Copper Canyon, but there are some better times to visit.

The Copper Canyon covers such a diverse landscape that each of the towns along the Chepe railway have slightly different climates throughout the year. For example, in the winter you can take in the snowy landscape while you cozy-up by a fire at the Hotel Divisadero Barrancas. Then, head just a few hours along the railroad and you’ll want to put your bathing suit on so you can cool off in the Sea of Cortez near Los Mochis.

That said, it’s generally agreed upon that September and October are the best months to visit. The entire canyon system will experience a rainy season throughout July and August, often carrying over into September. Immediately following the rains, the landscape becomes green and lush and the rivers are full, and the waterfalls are spilling over the cliffs. The average temperatures through September, October and November are wonderfully comfortable; not too hot and not too cold. Of course, these temperatures are reached again in April, May and June, the only difference is that most of the rivers have dried up and the landscape is a little less green.

Although autumn and spring are great times to visit, the winter months can be very picturesque as well. In December, January and February, towns such as Divisadero sometimes get snow. Travel only a few hours further along the tracks and it can be 85°F (30°C) in El Fuerte.

In short, Mexico’s Copper Canyon is spectacular regardless of when you visit.

This site uses Akismet to reduce spam. Learn how your comment data is processed.